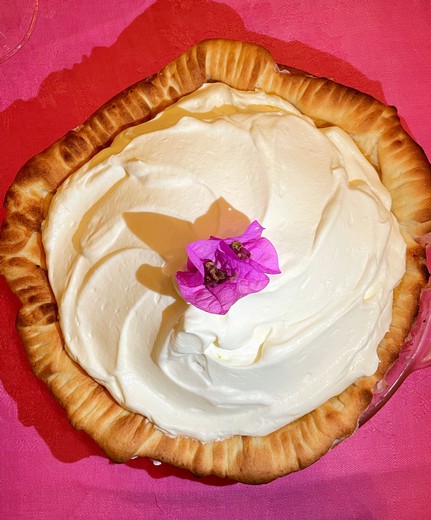 Beat the egg yolks with ½ C sugar until thick and lemon-colored.  Add the pumpkin, milk, salt and spices and blend well. Turn into the top of a double boiler over medium boiling water and cook, stirring until thick and darkened, about 15 minutes.

During this time mix the gelatin and water and stir to blend out all lumps.  When the pumpkin mixture is thoroughly warmed add the gelatin and mix well.  Set aside to cool. Stir from time to time to help cool the mixture.

When thoroughly cooled, in a separate bowl beat the three egg whites with ½ C sugar on high speed until the egg whites are glossy and form stiff peaks when the beaters are turned off.

Refrigerate at least 5 hours, or overnight.  Just before serving beat the whipping cream with the vanilla and the powdered sugar until the cream is thick and silky but not overbeaten so that it becomes lumpy. Spread the whipped cream on top of the pie in nice swirls, cut into large pieces and enjoy!