Fun Facts About the Languedoc-Roussillon Region 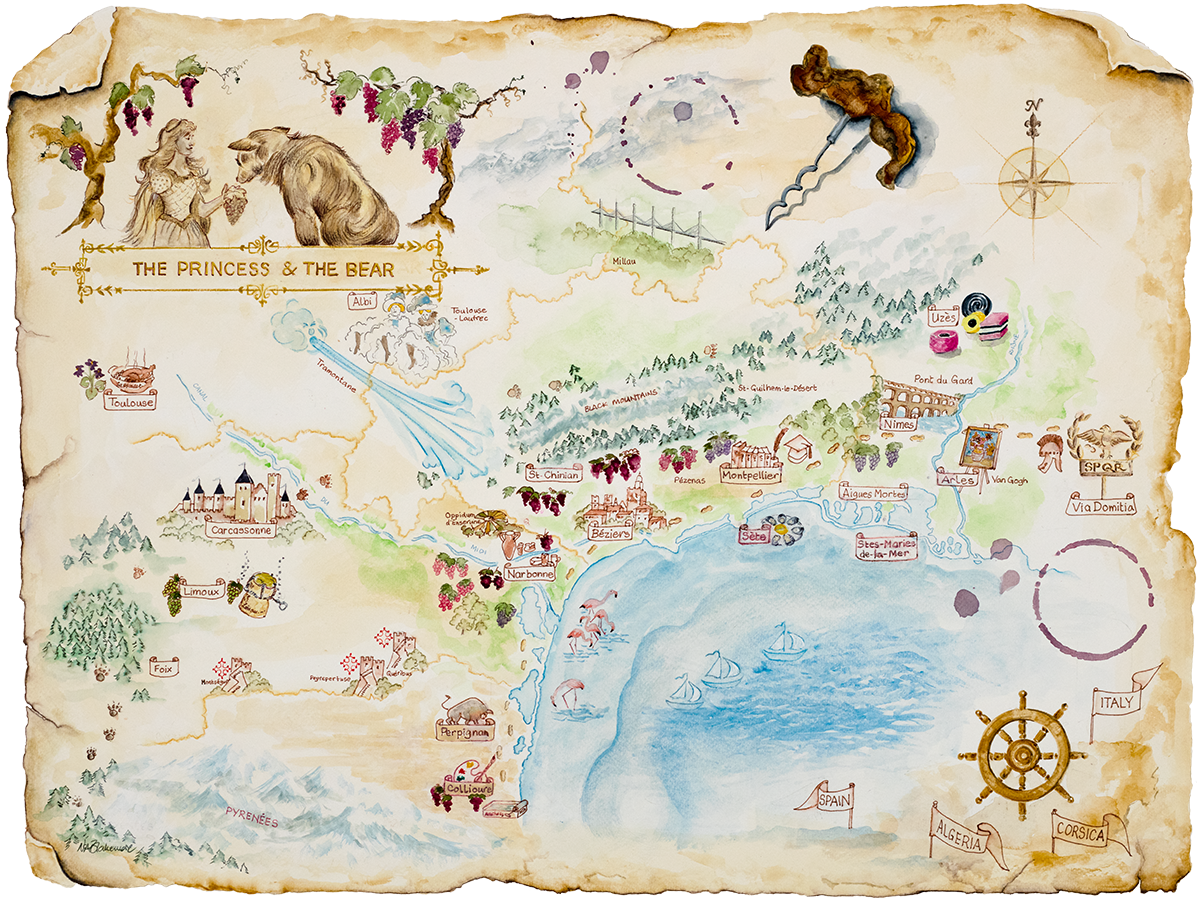 Languedoc comes from joining the words “Language” and “Oc”. The language of the Occitan people. Occitan was the language in this region just a century and a half ago and in some places one can still hear old folk speaking that foreign sounding tongue. Try sitting in the market in Narbonne on a Saturday. The word “Oc” means “yes,” making this the historic land of possibility, innovation and opportunity.

And land of opportunity it was. Being bordered by the Mediterranean Sea, it was in easy reach of all seafaring civilizations for centuries.

Marseille (Massalia) the heart of Provence was founded in 600 BCE by ancient Phocaeans, who were Greeks from Asia Minor. Formal viticulture was introduced and thrived, so wine has been produced continuously in the region for almost 3,000 years!

Narbonne was an old Roman port. The Romans arrived in 125 BCE and built the Via Domitia which connected Italy, France and Spain. Vines were planted on both sides of this road, and are still visible near the fabulous modern city of Narbonne. The Narbonne port allowed a robust Languedoc wine trade to flourish. Languedoc wine was shipped all over the Roman Empire in clay casks produced at an amphora factory located only 15 minutes from the village where Princess and Bear live.

Montpellier has been a university since the late 13th century and was a center of learning even before that. For centuries, it has been an educational hub for viticulture and enology (winemaking).

Mutage. In the 13th century, the process of mutage (adding spirit to wine must to stop fermentation and preserve sweetness) was invented in the Languedoc, hundreds of years before port wines were made. The sweet wines (vin doux naturel) of the Languedoc are some of the most delicious sweet wines in the world.

Limoux. In the 16th century, sparkling wine was created by the monks near Limoux 150 years before Dom Perignon “tasted the stars” further north in the Champagne region of France. That was a happy day for the world of celebration worldwide! We love the bubbly wine from méthode ancestrale, and also the Blanquette de Limoux and Crémant de Limoux.

Canal du Midi. In the late 1600s, the incredibly beautiful and romantic Canal du Midi was completed, a staggering engineering feat which connected the Atlantic Ocean to the Mediterranean Sea, allowing the flow of commerce to bypass the sea route around the Iberian Peninsula. In 1996, the Canal was crowned a UNESCO World Heritage site. Our “giving back” and paying it forward is literal in this case by donating at least 5% of our profits to replanting trees along the Canal du Midi. This effort will last hundreds of years.

Phylloxera hit France in the 1880s devastating most of the vineyards throughout the country. The Languedoc was the first French wine region to replant vines grafted on to American phylloxera resistant vine stock. Getting a jump start on replanting, by 1900 the Languedoc had become the largest supplier of wine, producing 50% of all the wine in France. The Languedoc-Roussillon is the largest wine producing region in the world. In recent years, innovative independent winemakers have begun making excellent small production wines.

The Cathars. It is said that Mary Magdalene may have arrived from Egypt in Saintes Maries de la Mer in the Camargue and that her teachings may have formed the basis of the very forward thinking Cathars. Others have written that their ideas came from Gnostic teachings of Persia or the Byzantine Empire, coming to France through the Balkans and Northern Italy. The Cathars were a religious group widespread throughout the Languedoc beginning in the 11th century. They are remembered for opposing the feudal system and the hierarchy of the Catholic church, which included refusing to pay tithes. They believed in the equality of women and men, and in living a simple non-materialistic life keeping close contact with the earth. The Languedoc was written about as being a place of high culture, tolerance and liberalism. This was the culture of the troubadours. By the end of the 13th century Catharism was the dominant religion of the Languedoc. Threatened by this, Pope Innocent XIII ordered the only crusade within Europe and the Albigensian Crusade began in 1208 against the population of the Languedoc. By the end of the 14th century, over 500,000 people had been brutally killed and the Cathar religion had been destroyed. The Languedoc went from being one of the richest regions in Europe to being one of the poorest. The Languedoc culture went from holding a sophisticated world view with the Occitan language being a high literary language to being looked down upon by other parts of France. We are hoping to see a resurgence of the vitality of the people of this region as the Languedoc-Roussillon becomes more well known in the world.